FAQ #8: What are the most popular categories? 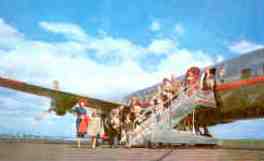 Just to refresh you on how we organise cards: geographical, theme, or both. For example, a postcard of Los Angeles Airport would appear in “California” and “Aviation” and possibly even “Flags” if one was prominent in the photo. For this FAQ, we’ll focus on themes, and it’s an easy question to answer.

Right now we have 100+ theme categories, though the number is going down slowly as we retire some that have less appeal. On the other hand, some topics are clear winners, and here they are: Aviation, Libraries, Railroad/Metro, Stadiums, and Tram/Trolley/Cable Cars. One customer had been collecting model airplanes until he noticed they were crowding him out of his living space, so he switched to postcards of specific types of aircraft. Much more practical, and cheaper, too. One customer, Luiz, who has become a good friend, boasts a collection of 10000+ stadium cards from around the world but is always on the lookout for obscure locations–and we have many of those. Another customer sought out very old library postcards. And trams have the broadest reach of all. Luckily, here in Hong Kong, postcards of trams are not unusual. There are something like 170 tram cars in the entire fleet, and we would like to have one card for each tram but that’s not gonna happen.

Many of our categories have cards specific to themselves: for example, the aircraft (Thai Airways) in the photo for this blog entry is just an airplane, not tied to any particular location, so it may appear only in Aviation. “Easter” would be another example of that. Other categories, including Libraries, are almost always going to connect to a specific place too. And some categories, such as flags, are very often incidental to whatever’s in the main photo, so those cards appear in multiple categories.

We thought about making this FAQ about most and least popular categories but that doesn’t seem right, because it’s a matter of luck and visibility. Back to flags for a minute: if we just totalled up the numbers, we’ve sold many cards with flags but usually because of the location or main focus, not because the flag happened to be there. That will never be an issue with airplanes or the other popular categories.

Now if you want to do your part and boost up some other category, you know how to do it!