The Future of Postcards 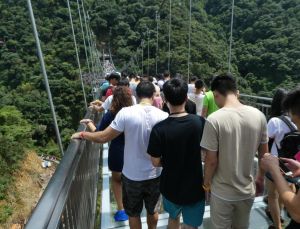 A recent article in our major local newspaper, the South China Morning Post, carried the title “Tech-savvy travelers are reshaping city’s tourism”.  Well, we knew this already.  What caught our eye was the sub-head:  “Gone are the days of postcards”.   It’s getting harder and harder to disagree

Now if, like many of you, you’ve not had the chance to experience domestic Chinese tourism on a mass scale, we have a spot to recommend. Not long ago we went off to Qingyuan, near Guangzhou in Guangdong Province of PRC, to see a new glass bridge (pictured) and nearby circular glass outlook that projects over the Gulong Gorge and waterfall. As great as the scenery is, it was no match for the many thousands of people all trying to climb those 1000 steps, maybe go ziplining, maybe whitewater rafting, but without exception taking selfies with every leaf and drop of water. Nothing new there either. This impressive facility has a large commercial area down at the starting point. Food shops, coffee shops, supermarkets, souvenirs … but not one postcard in sight.

Hard to know how many persons pass through there in a day, certainly many thousands. If you’re old enough, you’ll know exactly what we mean when we say these people are thinking of postcards in the same way they think of computer punch cards, which means: not at all.

Later on, the tour brought us to the Opium War Museum in Dongguan, also near Guangzhou. You can easily Google that to read about it, but we really lit up when we found one souvenir kiosk off in a corner, selling melting ice cream and … postcards! And not only did they have some of the museum and of Dongguan, they proudly produced two rubber-stamp “chops” for us to mark cards proving we had been there. Not of that bridge, of course, but if it was ever true that anything was better than nothing, this was it. (We’ll get around to scanning these and putting them into the site soon.)

What’s the moral of this story, apart from the continuing reminder that postcards aren’t everywhere like they were before? Like originals of anything, once a postcard is gone, it’s gone. We are happy to have a good representation from all over, and you don’t have to fight the crowds to get some.