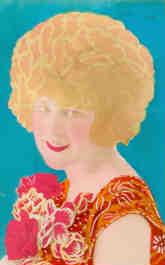 We have more than 100 theme categories, ranging from general (Winter) to specific (Buffalo Bill).  Diligent readers already know that we often enter cards into more than one category.  If it’s a postcard of an old airplane, no problem.  But what if it’s something like you see here?  And how do we decide on categories, anyway?   We could go on asking you questions until the sun rises across the harbour, but we’ll tackle the answers now.

We have this catch-all called “No Specific Theme.”  For the most part, any card landing there really doesn’t fit anyplace else, or maybe it does but we’ve not gotten around to re-assigning it yet.  If we were to notice maybe 20+ cards with one common topic in there, we might consider opening a new category.  A good example of this would be “Outer Space,” which is about as discrete as any theme could be.  Mostly, however, we chose our existing groups from these sources:  (1) Cards we already had, (2) Categories other postcard websites use, (3) Cards we accidentally received (yes, this happens), and (4) Topics we just wanted to build up from the beginning.

Looking ahead, we have six or seven more solid ideas and will open new themes based on those, though it takes time to go back through current entries and reclassify them.  Definitely any new group needs to be narrow enough to be specific and instantly recognisable, with customer appeal.  We already regret a few of the themes we have now, and you could probably guess which ones they are, but we’ll leave them there for the time being.

The new ones won’t be including anything like “beach,” “clouds,” “furniture,” “sea,” or anything that would capture just about every postcard ever made.  One we’re almost certain to open before too long is “Large Letter,” a style of card most popular through the mid-20th century and having–guess what?–the place name in huge letters across the front.  We like those, we have many, and, eventually, we hope you’ll like them too.  Feel free to make suggestions