U.S. Presidents, The Lot of Them 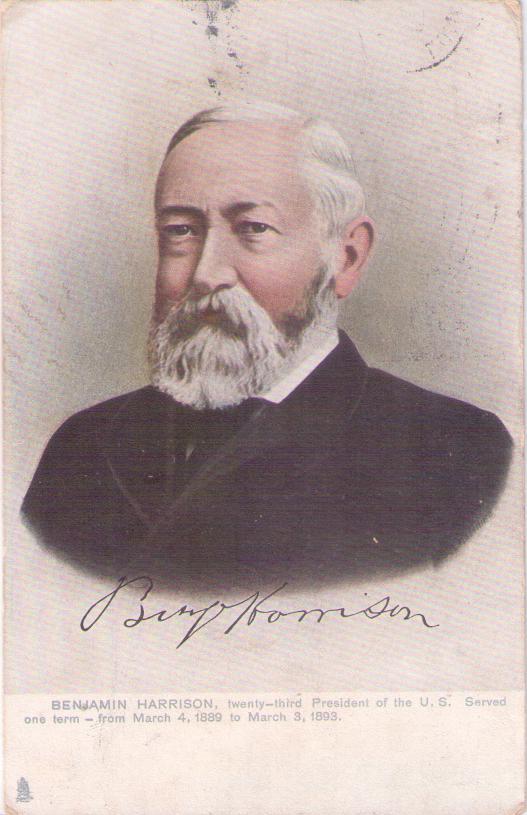 Let’s open by acknowledging that a majority of our Blog readers are neither American nor live in the U.S.  Yet still, we have that theme category because … well, just because.

Given that postcards didn’t go into circulation much before the late 1800s, that meant about half of all presidents had come and gone by then, so whatever examples we have represent their portraits, their homes, museums, tombs, libraries, dogs, or whatever else is available.  Take Benjamin Harrison for example, a Republican in office from 1889-1893, therefore right on the cusp of being worthy of his own card.  He was the grandson of an earlier President Harrison (William Henry) and rated somewhere in the middle for his efforts and achievements.  But he was also the first president to have electricity in the White House and was scared of being electrocuted, so he went to bed with all the lights on.

We all have our quirks.  Regular Blog readers know we resolutely try to avoid being political when we describe (most) cards, and (for the most part) we’ve been successful about that.  But these are trying times, for sure.  Politics aside, we’ve been trying hard to source a Biden/Harris card or two.  Or just Biden.  Or just Harris.  (And now you know why we chose Benjamin HARRISon.)  This is turning out to be quite a treasure hunt.

The other day we were chatting with our friend Kerry, who lives in Arizona and is a committed postcard treasure hunter in his own right.  Here’s the problem — which, if you follow American politics at all, you’ll understand instantly — certain states veer Republican and certain states veer Democrat.  The odds of finding any shop willing to sell political cards of one party in a state of the other party are not great.  Kerry might need to print his own cards if he is to find Biden/Harris in Arizona.

Then we were writing back and forth to our friend “A” who lives in Minnesota.  Maybe less committed to postcards, but always willing to help, and living in what should be a Democratic stronghold, he’s had no luck yet either.

We know two places where we could get these:  the National Mall tourist stalls in Washington, D.C.; or eBay.  Alas, we’re not in Washington and have no hope of being there anytime soon.  And we are not overly pro-eBay either, for various reasons.  So we need to get creative and ramp up the search.  And we will.

Finally, if we were ever going to break our rule about being apolitical in this website, now would be the time.  It is sooooooooo tempting to do that.  But we won’t.  Do you know this expression:  the toothpaste can stay in the tube.

Bye for now.  Wish us luck.