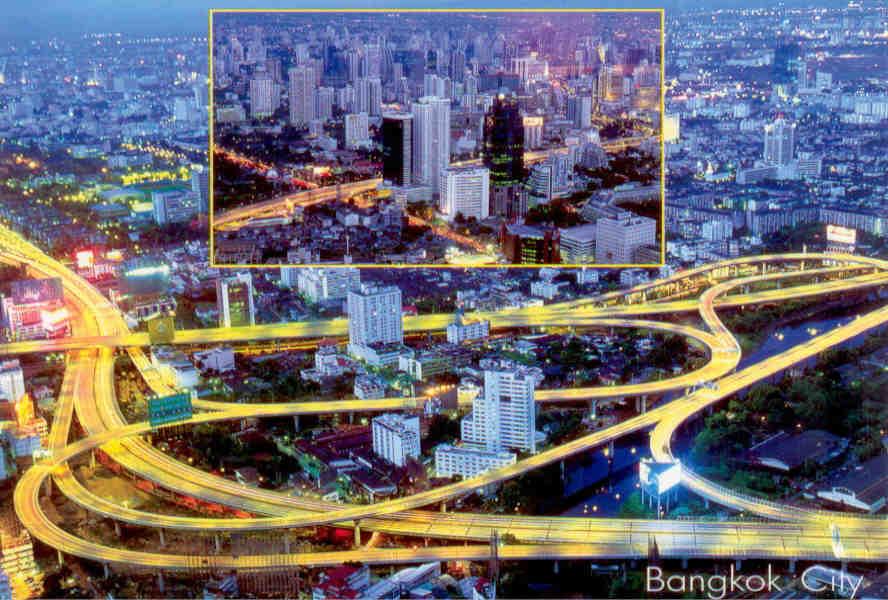 We just came back from a short trip to Bangkok. These trips are usually for various administrative things, but we always try to find time for postcards too. Last week was no exception, and we got lucky, though not in the way we expected.

Some of the big Asian cities really don’t have much heart, or soul. So as not to alienate our customers, we won’t name the ones that we think have turned themselves into machines. Bangkok is definitely not in that category. It’s a huge, sprawling, hot, colourful mess–constantly active, famous for some of the worst traffic in the world, and apparently for never-ending “political” confusion too. Thai food is some of the best anywhere, and nobody knows how to manage tourism better than Thailand does, unless something goes off track–like an occupation of the airport, or street demonstrations, or some of the other, darker elements that can get in the way of a good time.

What we’ve noticed over the past few years is a general reduction in street displays of postcards, and a rapid increase in retail prices of what we do find. There’s a certain sameness to many of the cards: temples, royal barges, dancers, and more temples. So we just look for anything different. On this trip, we had heard about the Central Post Office and that it had a philatelic section, so we went over there. The building is just enormous, but empty except for what looked like a small, ordinary set of counters tucked away in one corner. No postcards there. But a little exploring brought us to some dealers nearby, looking much as if Charles Dickens had set up stamp and coin shops. We found some great Maximum Cards, and these will get into the site eventually. We also, finally, found some 3D cards in one place only.

Thai postage stamps are also brilliant–big, colourful, detailed, replete with art and history. So if someone you know goes to Thailand, and sends you a postcard with two or three of those, let us tell you now: you’re probably not going to throw it away, and someone is going to ask you for that card “if you don’t want it.”