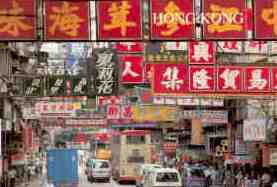 It’s about time we tackled the subject of our home base.  Hong Kong must be one of the world’s most-visited cities.  Rightly so.  It’s on the way to everywhere, has a great airport, much to see, and with a few concessions to room size and meals, it need not be too expensive to stay and explore.  (This is the old tour guide in us talking.)  Here are some observations about Hong Kong’s postcards–at least the ones visitors are likely to see.

First, most cards for sale are larger than “standard” 10×15 cm.  And these cards are on the sterile side, not much humour or creativity–just views of Victoria Harbour from Victoria Peak, or (as we show here) one or another of the roads congested with neon signs.  Throw in a tram or two, lots of pedestrians, and the occasional batwing junk–those small boats with the red sails–and that’s about it.  Other favoured subjects:  a statue of Bruce Lee on the Avenue of the Stars, the Big Buddha attraction at Ngong Ping, and the Peak Tram making its way up or down from the Peak Tower, which happens to be one of the better places in Hong Kong to find postcards–apart from this website, of course.

What many people don’t realize is that about 75% of Hong Kong is not urbanized, and 40% of it is country parks.  These are now under siege by developers who are going to build structures no matter who or what gets in the way, but for now there are plenty of natural attractions.  But few if any mass-market postcards of this.  Many years ago, one company did publish sets of waterfalls, shorelines, and so on, but they were expensive and not too popular and have now disappeared.  We have a UNESCO-designated geological area, but only the rare postcard of it in tourist locations.  We have Disneyland, but cards of that are only available at the park itself, or at their shops in the airport–when there’s stock.  We have another marvelous theme park, Ocean Park, but even cards from there are scant.  And if you want anime/manga or fantasy cards?  Good luck, even in the many Japanese-style arcades.

If we were the Post Card King of Hong Kong, we would arrange it so that certain types of cards would be much more available than they now are–which in most cases means “available at all”:

*  Map of the HKSAR, inclusive of all islands, flag, and so on–similar to typical “Greetings From” cards in other countries

Not to say these don’t exist.  It’s just that we don’t see them.  Different museums often have small racks with cards specific to their own topics, and that’s great (a good example:  the Railway Museum at Tai Po Market) but few tourists ever get there.  So come visit, explore for yourself, and then let us know how we can add to our stash!